Wow, this show was so funny and absolutely amazing. All the actors were on point and very talented. My first time seeing the show, was definitely not a let down!

Was the best night of my week! Definitely worth seeing!! Such amazing acting and voices. As Gretchen would say, it was “fetch!”

FETCH IS NOT HAPPENING, BUT THIS IS

The Best Musical I've Seen In A LOONNNG Time, This Is Now One Of My Favorite Musicals, Due To The Acting, Music, And Overall Story Of The Musical

I was very excited to go see this show with my daughter, but I'm afraid it seemed more like a high school production acting-wise. It was very loud as one other reviewer noted, and it was hard to understand the words of several of the songs because the music was either too loud, or maybe they were having issues with the mics. That being said, the sets were very clever and the standout performances were from the actors who portrayed Karen and Janice. The theater was very nice and the attendants helping with seating were friendly and welcoming.

Well, I definitely had a first at this show. It was the first time that I have ever left during intermission. Unfortunately, I agree with some of the other reviewers. The leads were very nasally singers and the actors raced through their lines and the music was super loud and drowned out the singing. My husband and I could not understand anything they were saying and missed all of the jokes. We were not the only ones leaving at intermission and I asked one gentleman why he left and he said the same thing that it was just so loud it was not enjoyable. I thought maybe it was where our seats were on the right orchestra, section A, but he was in the balcony and had the same problem.

Honestly - it was so loud that it gave me a headache and much of the songs had me wincing in agony. Lead actresses were both nasally; and it was much like an actual high school musical in that it was so bad. So much unnecessary screaming.

So disappointed... so much sexual content! A whole song about the middle finger, sitting on dicks, lots of sexually! Be forewared all you parents and grandparents who thought this would be a good show for your daughter. Highly disappointed, this could have been so cute and funny and enjoyable had they left out all the sexually, really bummed they choose to go that route.

Too loud, too vulgar, too amateurish.

At intermission, my husband, myself and several other couples dashed for the door to go home. We collectively agreed that the main characters voice was so shrill it gave you a headache. I have seen musicals in Germany, England, New York City and San Francisco and loved them. This is the first time I have been at a musical and was bored. I could not wait for intermission to come so I could get out of there! So disappointed.

Help your fellow Jacksonville Theater visitors by leaving the first review. Everyone will love you for it, we promise!

I LOVED every minute of this production!

Tina Fey's acclaimed film Mean Girls has been a huge hit on Broadway in this new HYSTERICAL musical adaptation! The story compares life in high school with that of animals trying to survive in the wild.

Meet stars from
the cast of 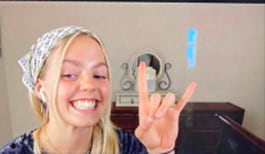 Sound good to you? Share this page on social media and let your friends know about Mean Girls at Moran Theater.